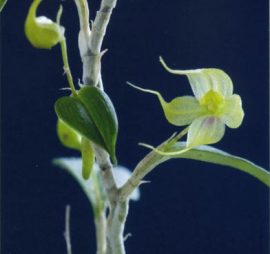 Bosque de Paz Biological Reserve is a “hotspot” in Central America for species diversity in both animal and plant life. For its location nearby the Continental Divide, there is high humidity carried by wind currents from the Caribbean that promote microenvironmental conditions for epiphyte growing. In its altitudinal range from 1450 to 2300 m, it consists of primary and secondary forests, as well as areas in various states of reforestation, providing a wide microhabitat mosaic suitable for orchid assemblage. A long-term orchid inventory has been in progress since 2004 that is demonstrating the rich diversity of orchid species found there. The first checklist was published in 2007 with 163 species in 47 genera (Muñoz & Kirby 2007). To date, the checklist for the orchid species recorded at the Reserve includes more than 200 species among +1600 for all of Costa Rica. Three endemic, charming miniature species, belonging to the subtribe Pleurothallidinae, have been discovered at the Reserve and described as new to science:

This epiphytic species was observed for the first time inside the Reserve, and was described as a new to science in 2011 by Dr. Adam Karremans and M.Sc. Melania Muñoz, both previous botanists-in-charge of the Orchid Garden. The latin silvae-pacis means “forest of peace”, chosen to honor the name of the Reserve “Bosque de Paz”. It can be found at bloom from September to March. See the complete scientific paper here

This terrestrial species was observed for the first time growing among mosses in the highlands of the Reserve, and was described as a new to science in 2015 by Dr. Diego Bogarín, Dr. Adam Karremans and M.Sc. Melania Muñoz. The name honors Dr. Stephen Kirby, geologist by profession and orchid enthusiast that co-founded the Orchid Garden and has been promoting and co-funding the Orchid Conservation Project at Bosque de Paz since 2004. It can be found at bloom at least in August and September in the wild, above the 2000 m in elevation. See the complete scientific paper here

This epiphytic species was, in first place, recorded as Pleurothallis cardiothallis, to which it is closely related. But, after studying it deeply, it was described as new to science in 2020 by Prof. Franco Pupulin, Lic. Melissa Díaz and Dr. Alec Pridgeon. The name honors the González family, who avidly support orchid research in the Reserve. It can be found at bloom at least from June to January, at 1500–1600 m in elevation. See the complete scientific paper here.